WSLL, MLRC and DCLRC will be closed Thursday, July 4 in observance of the Independence Day state holiday. On Friday, July 5 WSLL and MLRC will be open, but DCLRC will remain closed for a Dane County designated furlough day.

There are still openings in each of our upcoming legal research classes. On Tuesday morning, July 23, Finding Wisconsin Public Records will be presented in the WSLL training room in Madison. That same afternoon, a WSLL Web Tour class will be offered in Meeting Room 1 at the Milwaukee Public Library's central library, just a block from the Milwaukee County Courthouse. For more information and to register, please visit our Classes web page.

The Lighter Side of the Law

And we do mean it's a growing collection. We just added over 50 titles recently donated by Lucille Busse, former Library Assistant at the WSLL Circulation Desk and an avid reader of both Dick Francis and Sue Grafton. Many thanks to Lucille, and to everyone who has supported this collection over the years.

To find out more about the Prose & Cons Collection, including a current list of titles and how to make a donation, please visit our Special Collections web page and scroll down to Prose & Cons.

We bid farewell to Jennifer Schumacher, who has accepted a full-time receptionist/paralegal position at a law firm. Best wishes, Jennifer.

We welcome David Murphy, who joined the MLRC staff on June 3. A native of Australia, David holds a law degree from Murdoch University and worked for the Australian equivalent of the Attorney General's Office, as well as a private firm where he specialized in contract law and commercial litigation. David also volunteers at the Milwaukee Justice Center's Family Law Clinic, right across the hall from the MLRC.

This Just In… – Pete Boll

This single volume looseleaf provides a valuable resource to attorneys in writing jury instructions that spell out a clear statement of the issues, a discussion of the evidence, and an explanation of the principles of a case. This latest update contains new instructions and numerous new case and secondary authority citations in tort case issues such as:

The May 2013 update includes a new chapter, "Location Privacy: Technology and the Law" which covers:

Observing the scramble to replace Google Reader (which ceased operation July 1) brings to mind the saying, "When a door closes, a window opens." Google Reader's exit from the RSS market has encouraged new products and energized existing ones.

If you haven't been a "newsreader" user in the past, now may be the time to give this tool a second look. If you've been a Google Reader user, now is obviously the time to go shopping for a new aggregator.

What is a newsreader? David Pogue of the New York Times provides an excellent description: "It's like an online newspaper you assemble yourself from Web pages all over the world. Instead of sitting down at your desk each morning and visiting each of your favorites sites in turn - say, NYtimes.com, Reddit.com and HuffingtonPost.com - you just open reader.google.com. There, you find a tidy list of all the new articles from all of those sources, organized like an e-mail Inbox. You skim the headlines, you read summaries, you click the ones that seem worth reading."

Tech columnists from every corner of the web have been testing, touting, and trashing replacements for Google Reader. So now is a great time to read up on their findings. Here's a short pathfinder: 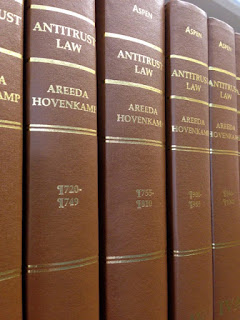 Reportedly the most cited work in its field, Areeda's Antitrust Law: An Analysis of Antitrust Principles and Their Application is clearly an authority on antitrust law.

This title - comprised of 14 volumes, a standalone supplement volume, and another volume containing the table of contents, table of cases and index - is divided into four parts:


When researching antitrust law, you may also wish to consider two other titles within the State Law Library's collection: Kintner's Federal Antitrust Law and Antitrust Laws and Trade Regulation by Von Kalinowski.

Kintner's provides analysis of federal antitrust statutes and citations to federal court opinions of all major areas of federal antitrust law. In June the library received an entirely revised volume (II) for this title on practices prohibited by the Sherman Antitrust Act. The 10 volume Von Kalinowski set provides analysis of business practices that may conflict with antitrust laws. This comprehensive work includes citations to federal, state and international primary law.

One of the best methods of keeping informed of recent U.S. Supreme Court decisions and cases before the Court is to follow SCOTUSblog. Written by lawyers, law professors and students, the blog tracks every merit case before the Court and reports on the case at least three times: prior to the argument, after the argument, and after the decision. SCOTUSblog also provides live blogging as opinions are released at the end of the term.

Merit cases are arranged by term, with each case-focused page providing access to the lower court decision, transcripts and audio of oral arguments, and ultimately the Court's decision. The Proceedings & Orders section for each case, listed by date, is an easy-to-use source for full-text petitions and briefs. The SCOTUSblog Coverage section previews arguments, provides commentary pieces, and recaps arguments and opinions.

Does the number 867-5309 mean anything to you? Evidently it does to U.S. Supreme Court Justice Elena Kagan, who recently quoted from California rock band Tommy Tutone's 1982 hit song that made that phone number so memorable. The song, 867-5309/Jenny, was hinted at in the recent opinion American Trucking Association v. City of Los Angeles, in which Justice Kagan stated in part:

"The two [requirements] directly at issue here compel the company to (1) affix a placard on each truck with a phone number for reporting environmental or safety concerns (You've seen the type: "How am I driving? 213-867-5309") and (2) submit a plan listing off-street parking locations for each truck when not in service."

The song reference made the news soon after the opinion's release on June 13th, with such headlines as, "Kagan dials 867-5309" and "Justice Elena Kagan adds to the Tommy Tutone legend."